Captain Ray Bukowski, Jr. is a USCG-licensed captain and has decades of fishing experience in New Jersey’s bays, rivers, near-coast areas, and offshore areas. Some of his specialties include striped bass, bluefish and bonita; sea bass and other wreck species; and tuna/canyon fishery. his pleasant personality, desire to provide quality charters to his clients, and willingness to share his knowledge of the sport has led to the proliferation of his success as both a fishing and hunting guide. Captain Bukowski has appeared on local and national broadcasts on hunting and fishing, but enjoys being at home in his New Jersey waters the most. He prides himself on operating charters that cater to the client’s interests, needs, and level of experience.

Captain Jay Andrews is a USCG-licensed captain. He is a lifelong shore area resident with a lifetime of experience and family lineage to create an enormous bank of knowledge. Jay has been responsible for the operations of several charter, corporate and private boats over the past 25 years. Jay has countless canyon runs under his belt, and is just as comfortable in inshore water. His pleasant easy-going nature surprises many when he FLIES around the cockpit to catch fish. Jay is a retired school teacher who also guides duck hunts with Reedy Creek Outfitters. Finally in and in addition, Jay operates a 65 foot research vessel for the Monmouth County Academy of Science & Technology. 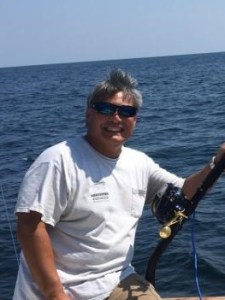 Capt. Alan is a USCG-licensed Captain (OUPV). He is also the owner and frequent operator of the Mushin. He has fished for well over that last 40 years from freshwater panfish to blue marlin, and most everything in between. He has fished the Jersey Coast for over four decades, and enjoys pursuing all species of saltwater fish. His specialties include bottom fishing for cod, tog, and sea bass; and offshore canyon fishing for tunas, sharks, and marlin. He views every trip as unique, and tries to tailor trips to the client’s interests and skill level.

Alan is also among a select few who serve as SHIMANO FISHING TACKLE ProStaff, as well as representing other brands such as PowerPro, Sterling Tackle, G. Loomis, Costa, MaddMantis, Old Man’s Tackle Box, and others.

Dan joined the crew in 2017 as a full time mate after being highly recommended by other boats he was affiliated with. He came to the team an avid angler with lots of inshore fishing experience. But after running offshore many days per week in his first season, Dan quickly developed an offshore angling skillset that takes many fisherman a lifetime to achieve. Prior to joining the Mushin team, Dan studied marine sciences and worked for New Jerseys Marine Fisheries Administration and Artificial Reef Program. In his spare time, you can find Dan chasing stripers, fluke, seabass, sharks, and a host of other species on his family’s boat or with friends. He also enjoys hunting, surfing, and snowboarding and has traveled Mexico, Central America, West Africa, and beyond in pursuit of the mightiest fish and the perfect wave. Dan is a licensed OUPV captain and feels equally comfortable behind the wheel or in the ‘pit.

Jason Szabo, a lifelong resident of Brick, NJ, has been a Mate for the Mushin crew for years. He spends countless hours on the water. Jason specializes in back bay and inshore fishing for all species. He also has plenty of experience fishing for mid-range/offshore pelagics. Even from a young age, Jason has been a fixture in at least two of the area’s most prominent tackle shops. When not on the Mushin or elsewhere on the water, you will find him on the floor at Fishermen’s Supply where he has helped countless customers perfect their fishing skills. Jason has a wealth of knowledge that he gladly shares with clients on board the Mushin. He takes the time to show hands-on tricks and tactics to add to the excitement of the Mushin experience.Jason is often our “honorary mate in absentia” – even when he’s not personally on the boat, he’s the guy who ensures the bait and ice get on the boat, and supplies us with tons of fresh fishing info and intelligence.

Darryl Goffreda has had a lifelong love for fishing, and has been at it for over forty years. He has fished all over, from Alaska and British Columbia for halibut and king salmon to Costa Rica for sailfish and tarpon, but his true passion is chasing striped bass up and down the east coast from New Jersey to Massachusetts. He also enjoys offshore fishing for tuna. Darryl is a professional chef and has been known to slice up some tuna sashimi and prepare other mouth-watering delicacies when on board the Mushin.

Mike is an accomplished angler and operator. He has successfully had his own charter operation, Allison Rae, and run many private sport fishing vessels for many years, before coming to the Mushin team. He has fished the local inshore and offshore water for decades, which is a decided advantage to put anglers into the fish. His easy-going personality and humor keep everyone laughing for days!